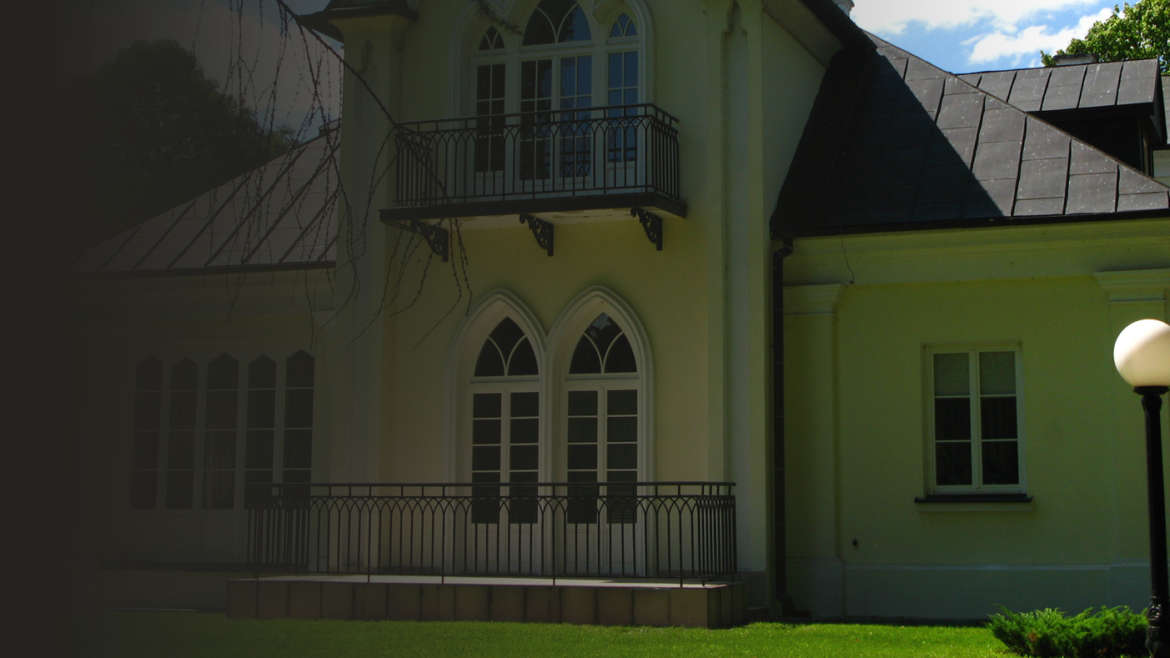 Today’s Roskosz is probably the former farm yard of the village of Hrud. The first mention of this place comes from the sixteenth century, when the said farm as part of the Bialski county of Brest belonged to the Radziwiłłów. Until the second half of the 17th century, the grange and its adjacent areas were entirely subordinated to economic purposes, and thus deprived of courtly character. In the second half of the 17th century, the village of Hrud and the farm became the property of Katarzyna of Radziwiłł née Sobieski – sister of King Jan II Sobieski. Thanks to her efforts, the farm buildings and green areas were thoroughly rebuilt in the Baroque style, acquiring representative features. It was then that the farm changed not only its purpose, but also the name – to Roskosz – because of the charming beauty of this place.

In the first half of the 18th century, the owner of the property in Roskosza was Anna Radziwiłł née Sanguszko – wife of Karol Stanisław Radziwiłł, a great art lover and well-known patron. She commissioned the architect Marcin Wiśniewski to design a wooden residential building with court features in Roskosza. In the years 1730-1731 the first wooden manor house was erected, covered with a hipped shingle roof. Its extensive interiors were decorated by numerous Flemish tapestries and paintings brought by Anna. The park was revitalized, enriching the adjacent areas with a system of dikes and canals. It was then that the basic elements of the spatial layout of the manor and park complex were formed, visible until today, min. three fish ponds connected to the river.

According to oral communications, at that time Tsar Peter I the Great, traveling incognito around Europe, visited Roskosz. The Emperor of Russia was supposed to entertain here for three days, hunting in the surrounding forests and crawling with water from a wonderful spring located in the park, which to this day beats from the ground and does not freeze in winter even during severe frosts. With time, the spring began to be called “Roskosza Spring”, whose name for the first time hearing it was not always associated only with the name of the village … As the 18th century rumor informs us, between Anna née Sanguszków Radziwiłłowa and Tsar Peter the Great a great feeling was born. The fruit of this love was to be Hieronim Florian Radziwiłł, later called the Cruel Prince.

After the death of his mother, Hieronim, as the heir to the estate in Roskosze, in 1765 ordered the reconstruction of the manor to architect Jakub Korwin Popławski. This reconstruction, however, did not take place due to the disapproval of Prince Hieronim against the basic assumptions of the project. According to the inventory list from 1766, the manor was in a state of advanced ruin, so it was soon pulled down, and the wood was used as a building material for the houses of the townspeople of Biala digested by fire.

Another of the heirs of Bialska’s fortune, the uncle grandson of Prince Hieronim Florian Radziwiłł – Dominik Radziwiłł, a participant in the Napoleonic wars known for his passion for war, in 1807 he gave Roskosz a lease to his daughter plenipotent Ludwik Kamieński – to Ludwik Kamski – her to Ludwitz of Kamil Dominik Radziwiłł was killed in the Battle of Hanau in 1813, and the Michałowski family did not transform the lease into ownership until 1822, paying an additional PLN 213,341. For the Roskosza, the Michałowski rule was a period of its greatest prosperity. In the 1820s, in the place of the former vegetable gardens and the zoo, an English-style park was established with an unusual rich vegetation, also exotic (conservatory). The access avenue, preserved to this day, planted with lime trees, the oldest tulip tree in Poland and a larch, where according to legend and as a warning to local residents, the tsarist authorities hung one of the local participants of the January Uprising. Around 1840, a stone manor house and a stallion stable were erected, both probably designed by Franciszek Jaszczołd. The north-facing mansion was rectangular in plan, one-story, with a residential attic in the form of attic on the axis of the main facade. The manor was built basically in the late Classicist style, however, its eastern façade deserves special attention – with clear neo-Gothic features. A reins stable was also built in a similar style. Were it not for the neo-Gothic turrets, one could say that this is a textbook example of neoclassicism. In addition to the manor and stable, a number of wooden farm buildings were erected.

It is worth mentioning here that at that time Michałowski (until his death in 1812) was a general of the Kościuszko Uprising and a personal friend of Tadeusz Kościuszko – Ignacy Kamiński vel Kamieński. His body rests under a high, wrought sandstone cross located just at the entrance to the church. St. Anna in Biała Podlaska.
In 1842, the daughter of Michałowski, Izabela, who married Jan Łubieński, brought the Roskosz estate to her husband’s family estate. Less than 30 years later, Roskosz in the form of a dowry passed into the hands of the Mielżyński family. During this period, the manor underwent a major reconstruction according to the design of Władysław Marconi. The roof truss was then changed, thus expanding the attic with additional living rooms. At the end of the 19th century, the economic part of the estate was seriously industrialized. A distillery was established then (preserved to this day), stone barns (two of them existing until today), stables and all fours (one has survived to this day). During World War I, a German military unit was stationed on the estate, the soldiers of which destroyed a large part of the park and court equipment. The rich collection of the Mielżyński family, which was famous in the whole area, was dispersed.

Already after the war, the daughter of Mielżyński, Helena, who married Aleksander Karski, brought Roskosz into the Karski estate. The mansion destroyed as a result of war perturbations was subjected to another renovation, depriving it almost entirely of neo-Gothic elements. The park was also renewed, placing in it min. tennis courts and shooting range.

During the Nazi occupation, the estate did not suffer major damage, but shortly after the Soviet army entered 1944, the Karski family was transported to the east. In the same year, the court and estates in Rokoko passed to the treasury of the nascent PRL, eventually becoming the seat of the State Farm. In 1990, after the fall of that same, the manor was handed over to the Creative Work Center under the direction of Galeria Podlaska in Biała Podlaska. After the administrative reform in 1998, the Creative Work Center came under the jurisdiction of the city of Biała Podlaska, and on August 31, 1999, the buildings and the adjacent park were taken over by the General Headquarters of Voluntary Labor Corps. The overhaul of the establishment, lasting over 2 years, brought life back and gave this place its due splendor. In 2001, the European Center for Education and Care OHP and the Training and Recreation Center were established.

European Center for Education and Upbringing of OHP in Roskosza – the statutory assumption is to promote the principles of democracy and tolerance and to create conditions for proper social and professional development of young people – with particular emphasis on disadvantaged young people – by actively building a system of assistance for the most vulnerable groups, organizing and supporting forms of getting out of poverty, unemployment and pathology as well as the promotion of direct international cooperation in the framework of the implementation of European programs.

The Training and Recreation Center is the perfect place to relax and work in an atmosphere of peace and quiet.